Today we’re going to look at how God’s thoughts are higher when it comes to healing.

I’m going to debunk 3 common myths Christians often believe when it comes to healing. By reading this post, you’ll find a greater freedom because lies always keep us limited and bound.

Have you ever thought ‘God won’t heal me now because I’ve made too many mistakes…..God is more likely to heal the super spiritual…..My illness is minor compared to others….’

Oftentimes we confuse human nature with God’s, or we try and second guess him, but the Bible tells us God’s thoughts are so much higher than ours.

Several years ago I had a painful and damaging experience in a church. We were asked to raise our hands if we needed healing and of course I raised my hand.

The church laid hands and prayed for those with raised hands…..No-one came to me. I felt terrible.

In front of me was an elderly man who had recently had a diagnosis of cancer. The church deemed this was worse and therefore laid hands on him.

The man with cancer was in his 80’s. He’d lived an abundant full life whereas I stood no chance of ever having a life like that.

But by this time I was very much aware of what the church thought and unfortunately I allowed this incident to scar me.  Was God also more concerned with life threatening illnesses?

Isn’t it awful when people dismiss and devalue your pain. ‘At least it’s not life threatening…..’ is a common judgment. ‘Chin up it’s not that bad…’ is another.

Rest assured, God’s thoughts are higher than ours. The church may devalue your suffering, but God never will.

I think the Holy Spirit chose a woman with an issue of blood to represent chronic illness because blood universally means ‘life’. When you live with chronic illness, you’re losing life. 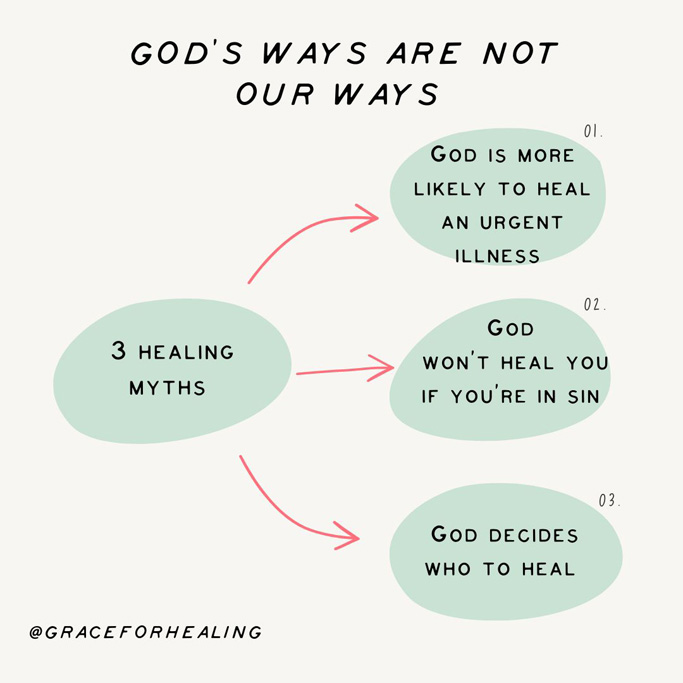 Human nature grades illness. Those people who are either visually ill, or those with anything life threatening and urgent will dominate people’s prayers.

Thankfully not our Lord Jesus. He made time for both Jairus’ daughter and the woman with the issue of blood.

Jesus didn’t say ‘I’m really sorry woman with the issue of blood but a young girl is worse than you and she’s my priority.’

Think about your own church. Let’s say there is a young 12 year old girl on the brink of death who needs your prayers. But let’s also say there is a woman with an issue of blood in your church who has a chronic condition.

Do you give both your same time and attention? Do you pray for the woman with the issue of blood as much as the young dying girl?

I used to have a role visiting those in my church family who had illnesses. Of course it was those with cancer that received cards, flowers and visits from people.

Those with a chronic health issue did not. (Of course I do understand that this is just human nature and that it isn’t sustainable for those who are unwell for years)

But I get frustrated. Surely it’s those who have been abandoned by doctors need support? Surely someone who has been suffering for decades needs more encouragement and help?

I came to the conclusion that all I need are just a few close intimate friends who understand my situation.

And I needed to accept that no matter which church I was in, urgent will always be the focus for the majority. But I take comfort in the truth that God’s thoughts and ways are higher. He is the all powerful one.

I was at a Bill Johnson conference many years ago. He tells a story of 2 women approaching him after a service one time. They both needed healing.

The older woman, let’s say she was in her 60’s had a bad leg or knee, the younger woman in her early 20’s had just a couple of weeks left to live. (I can’t remember the exactness of their details but in my memory it was something like this).

Bill Johnson ministers and prays for the older woman who received a miracle healing. He said the Holy Spirit had told him to pray for the older lady.

When he questioned God about this, he felt God say that when we (as in the church) can genuinely praise Him for what He does, even those seemingly minor  miracles, it will open the door to a much greater miracle.

Of course there is no such thing as a minor miracle, but this is from the human nature perspective.

MYTH #2 GOD IS MORE LIKELY TO HEAL THE OBEDIENT

Back to our inspirational woman with the issue of blood in our series.

Jairus was a leader in the synagogue, known by 1000’s. Yet this woman was unclean, unpopular and unloved. Jesus is just as concerned about her healing as He is about the young girl.

Healing is always about God’s goodness and not ours. Whether you’re a famous church leader or someone completely ‘invisible’, I believe God wants you well because of who He is.

Human nature would think God is more likely to heal the church leader or the one who’s been in church for many years. But God’s thoughts are higher. Healing is not about us.

When Jesus healed the multitudes, I’m sure plenty of them had unforgiveness, anger, unrepented sin etc. Yet they were healed.

God’s thoughts and ways are higher; we must allow Him to be God and we are not.

It’s easy to think that the more people who pray, the more likely the healing. Again, I don’t see any evidence of this in Scripture. Otherwise, those in leadership, or public figures stand a greater chance. I can’t see this being accurate.

MYTH #3 GOD DECIDES WHO TO HEAL

Most people think God is sitting in heaven, deciding who or who not to heal. This just isn’t true. The Bible says that God decided over 2000 years ago that He wanted me healed.

The woman with the issue took her healing. She tapped into his power when she touched with intention and expectation. Jesus didn’t know anything about it

And Jesus, immediately knowing in Himself that power had gone out of Him, turned around in the crowd and said, “Who touched My clothes?”

Some say that He knew but I’m not so sure. Jesus only knew what His Father revealed to Him. The Woman with the issue made the decision and not Jesus.

If we think it’s down to God, we’ll be passive ‘God’ll heal me if it’s his will’. But we already know from Is 53 that it’s always His will to heal, that’s one reason Jesus died.

She choose to reach out and take her healing. I believe God wants us to have this type of active healing.

THE HOLY SPIRIT HEALS YOU (side note!)

God isn’t sitting on the throne above, healing from a distance. It just isn’t His way. He is a close intimate God who lives on the inside of us through His Spirit.

The healer is in you, healing you. There is no distance.

Are you believing any of these myths?

What difference would it make if you could have the revelation that it’s God’s opinion that matters? That God’s thoughts are higher and we’re not likely to always understand them.

When we think God ‘should heal because…’, we are making a judgement. We judge if someone’s illness is ‘bad enough compared to so and so’, or we judge if someone is ‘holy enough’ for a healing.

Neither you or I are qualified to make these types of judgements.

God loves you and I believe He wants you well. He doesn’t see the dying as worse off. A lot of those Jesus healed were not dying. The blind, the lame, the withered hand….

Healing will always be a mystery. God invites us to trust Him and honour His ways.

Healing, like salvation, is all to do with Jesus’ sacrifice on the cross.

I hope this gives you some peace today.

Have a great rest of the week

Have you read other posts about this amazing woman? Take a look at